Shoulder's much better, neck was a torture, the Dawning of the Age of Squat…
Email ThisBlogThis!Share to TwitterShare to FacebookShare to Pinterest
Labels: Bodybuilding, Memoirs and Friends

0 comment(s)
It's been kind of slow here lately, I know, but I've actually been active "in a philosophical way" on a few other blogs and Facebook, so I hope to collate those conversations into posts here.

+ The reality of numbers and form…

+ The experienced present and general relativity (aka The Pope Versus Stephen Hawking!)

1 comment(s)
You only get two.

Time for a subvention...

12 comment(s)
'Twas asked in a thread at Doc Feser's blog:

"How does the Aristotelian/Thomistic conception of the soul and the body and their relation to each other resolve the problem of free will and determinism? How does the Thomistic soul/'form' redirect certain neuroparticles and thus intervene in the otherwise completely deterministic neurological pathways in order to produce the desired response? If they don't, there's no free will. Additionally, if they do, then they violate the fundamental physical law of conservation of energy."

A few other readers engaged the question, but mostly on the front of challenging the notion of physical closure and determinism. I took a different tack by trying to address the apparent conflict head-on.

I take much of the 'point' of A-T anthropology vis-a-vis physical causation to be that, while there is no question of a non-physical cause for bodily motion, in secondary terms, there is the larger principle that no body is 'just' a material body. As in: action is a response to perception but perception is mediated by sensation, conation, imagination, and, in the case of rational animals, intellection. These perceptual filters generate varying degrees of deliberation in their bearers, i.e. a proper range of action potential for various organisms. Amoebae have a very narrow range of sensible deliberation which can modulate there perceptual being-in-the-world, and higher animals have a correspondingly broader range of action. n Rational animals such as ourselves, by virtue of the intellectual judgment of universals in particulars and the good per se in being per se, have a deliberative access to a range of potential which transcends the deterministic bounds of purely physical causation. When a perceptual experience is given a value in the larger intellectual noesis of a human, the response is something which transforms an otherwise strictly indeterminate action potential into a concrete action, which eo ipso modulates how the physical organism responds to the physical stimuli. We don't experience the world "raw", and therefore we can modulate the incoming data; conversely, we don't respond separately from the entire Gestalt of our own (social-physical) place in the world, an entirety which just as seamlessly modulates our inner physical 'world'.

The bottom line seems to be this: Physical motion is not rational. Human perception and action are, however, rational. Humans are also continuous with the world of physical motion, but the power of our rational nature makes it the case that otherwise irrational physical matter responds and acts rationally, which is pretty remarkable.

Imagine a child who grows up seeing and handling triangles in his house but is never instructed as to what "triangle" means. One day, though, he is told the meaning of these objects and his entire world changes. Nothing physical about him or the triangles changes--there is no Cartesian 'gap'--, but everything about his perception and action has been transformed. Otherwise meaningless matter has been "de-potentiated" and "in-formed" such that his entirely 'materialistic' existence goes on as before, yet his actual, proper existence is qualitatively different. Perhaps you all know Polanyi's metaphor of the scribbled line suddenly becoming intelligible words and then flowing back into random scribbles. From nonsense to sense back to nonsense without a single physical break.

The larger doctrine of habits/virtues point to this fact by saying that recurring de-potentiation of one's body and environment leads to qualitative changes in both of them, yet without corrupting their physical contiguity/history in an otherwise a-virtuous world.

I have already tried to explain how intelligible order 'subvenes' (as it were) physical closure without violating physical order. I would simply like rephrase the question in order to show how Aristhomistic makes sense in a, perhaps disappointingly, plain way.

"How does the 'form' of a number redirect certain microparticles and thus intervene in the otherwise completely deterministic physical pathways in order to produce the intelligible content?"

Two, as a pure intelligible, makes otherwise meaningless, but physically 'taut', matter into an intelligible reality. No violation of physics, nor a physicalist reduction either. I can't "explain how" intelligible form "does" what it does, but I can't deny that it does what it does, and that this achievement is an analogous primer for grasping how soul orders body.

Actually, one commenter's reply to the question was in the same spirit as mine, and led to an increasingly lengthy tangential discussion of numbers, definitions, form, descriptions, etc., about which I shall write in the near future.
Email ThisBlogThis!Share to TwitterShare to FacebookShare to Pinterest
Labels: Cognitive Studies, History of Science, Philosophy

0 comment(s)
Summa contra gentiles Sancti Thomae Aquinatis - Glosses from Jazzland: SCG, Book I, Chapter 31: "Chapter 31: THAT THE DIVINE PERFECTION AND THE PLURALITY OF DIVINE NAMES ARE NOT OPPOSED TO THE DIVINE SIMPLICITY [CAPUT TRIGINTA UNUM: Quod..."
Email ThisBlogThis!Share to TwitterShare to FacebookShare to Pinterest

1 comment(s)
This Monday, quads and biceps. Back to the grindstone....

This Tuesday, chest and calves. Work around the pain....
Email ThisBlogThis!Share to TwitterShare to FacebookShare to Pinterest
Labels: Bodybuilding, Memoirs and Friends

Don't want to lose this again…

1 comment(s)
I read this joke a couple years ago but could not find it again until now, so I'm anchoring it here for safekeeping. The only thing funnier is that not a few philosophists think the punchline is the pinnacle of wisdom.

A philosopher once had the following dream.

First Aristotle appeared, and the philosopher said to him, "Could you give me a fifteen-minute capsule sketch of your entire philosophy?" To the philosopher's surprise, Aristotle gave him an excellent exposition in which he compressed an enormous amount of material into a mere fifteen minutes. But then the philosopher raised a certain objection which Aristotle couldn't answer. Confounded, Aristotle disappeared.

Then Plato appeared. The same thing happened again, and the philosophers' objection to Plato was the same as his objection to Aristotle. Plato also couldn't answer it and disappeared.

Then all the famous philosophers of history appeared one-by-one and our philosopher refuted every one with the same objection.

After the last philosopher vanished, our philosopher said to himself, "I know I'm asleep and dreaming all this. Yet I've found a universal refutation for all philosophical systems! Tomorrow when I wake up, I will probably have forgotten it, and the world will really miss something!" With an iron effort, the philosopher forced himself to wake up, rush over to his desk, and write down his universal refutation. Then he jumped back into bed with a sigh of relief.

The next morning when he awoke, he went over to the desk to see what he had written. It was, "That's what you say."

Email ThisBlogThis!Share to TwitterShare to FacebookShare to Pinterest
Labels: Funny and Random, Memoirs and Friends, Philosophy

1 comment(s)
I wasn't really paying attention until about mid-way through, so I didn't "get it" at first. Well done! An ode to the analogy of being and modes of signification!

This is why we get lost on the Internet…

0 comment(s)
From Salt of the Earth: The Church at the End of the Millennium, by Joseph Cardinal Ratzinger, an Interview with Peter Seewald (Ignatius Press, 1997):

The renunciation of marriage and family is thus to be understood in terms of this vision: I renounce what, humanly speaking, is not only the most normal but also the most important thing. I forego bringing forth further life on the tree of life, and I live in the faith that my land is really God — and so I make it easier for others, also, to believe that there is a kingdom of heaven. I bear witness to Jesus Christ, to the gospel, not only with words, but also with this specific mode of existence, and I place my life in this form at his disposal.

In this sense, celibacy has a christological and an apostolic meaning at the same time. The point is not simply to save time — so I then have a little bit more time at my disposal because I am not a father of a family. That would be too primitive and pragmatic a way to see things. The point is really an existence that stakes everything on God and leaves out precisely the one thing that normally makes a human existence fulfilled with a promising future.

Chapter 29: Likeness between God and Creatures 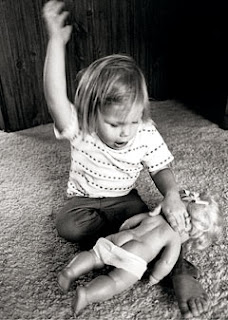 "Spanked, but not dead!"

Email ThisBlogThis!Share to TwitterShare to FacebookShare to Pinterest
Labels: Bodybuilding, Memoirs and Friends

0 comment(s)
I have deleted the ungainly links I had in this post before, having now been guided to set up a Posterous blog for hosting my music: mcbdesales.posterous.com. No need to download now, just click and play. My music is very eclectic, but I don't release anything unless I'm at least satisfied with it. So, in my opinion, and the opinion of various others, at the end of the day "it's pretty, pretty good."

Email ThisBlogThis!Share to TwitterShare to FacebookShare to Pinterest
Labels: Memoirs and Friends, Music

My latest gloss in SCG…

0 comment(s)
SCG, Book I, Chapter 28: On the Divine Perfection