Slavery by way of libertarianism...

0 comment(s)
At this point, the best thing I can say about lolbertarianism, is that its cringey, forced memes (e.g., obligatory military service is liderully slavery) are a helpful reductio of trying to establish a functioning social order upon an "EE" (Enlightenment-Egalitarian) basis; which is to say, far from bolstering political libertinism, lolbertarian reductio-memes point towards a return to hierarchy, patriarchy, political finitude, and robust solidarity (e.g., slavery is best understood as one form among many of the duties imposed by being born into a social order).

Vatican Too: Big To Fail 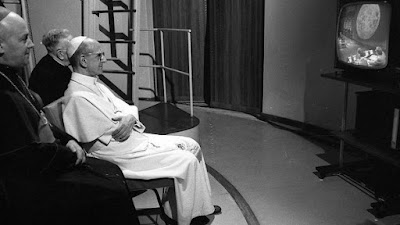 "[Conservative critics of the liturgical perestroika] ... note a certain confusion, and therefore a certain annoyance: first, these observers say, it was quiet, everyone could pray as he wanted, everything was known about the performance of the rite; now everything is new, surprise, change....

"We will not criticize these observations, because we should show how they reveal little penetration of the meaning of religious rites, and let us not glimpse a true devotion and a true sense of the meaning and value of Holy Mass, but rather a certain spiritual indolence, that does not want to spend some personal effort of intelligence and participation to better understand and better perform the most sacred of religious acts, to which we are invited, even obliged to associate ourselves. ... [I]t is in the nature of a practical, as well as spiritual, reform of inveterate and piously observed religious habits, to produce a bit of agitation, not always pleasant at all; but ... some explanation, some preparation, some thoughtful assistance soon remove the uncertainties and immediately give the sense and the taste of a new order. ...

"[W]e should not believe that after some time we will return to quiet and devoted or lazy, as before; no, the new order must be different, and must prevent and shake the passivity of the faithful present at Holy Mass; first it was enough to watch, now it is necessary to participate; before the presence was enough, now attention and action are needed; first someone could doze and maybe chat; now no, he must listen and pray. ... The assembly becomes alive and operative; intervening means letting the soul enter into activity, attention, conversation, song, action. The harmony of a community act, accomplished not only by the outward gesture, but by the inner movement of the feeling of faith and piety, gives the rite a particular strength and beauty: it becomes chorus, becomes concert, becomes rhythm of an immense flying wing to the heights of mystery and divine joy. ...

"[In contrast, we hear praise for the new rite from those who say,] finally you can understand and follow the complicated and mysterious ceremony; finally we get a taste; finally the Priest speaks to the faithful, and we see that he acts with them and for them. ...

"[I]t is to be believed that the warning of the religious intensity that the new form of the rite demands will not fail".

http://w2.vatican.va/content/paul-vi/it/audiences/1965/documents/hf_p-vi_aud_19650317.html
Email ThisBlogThis!Share to TwitterShare to FacebookShare to Pinterest

"To explain myself..." - Orestes Brownson Edition

"[As a Catholic,] I owe obedience to the Pope only insofar as the spiritual head of my Church. Nevertheless, I have maintained and maintain that this spiritual authority extends to the morality of temporal things, in so far and only in so far, as they are spiritually related or have a spiritual character; that is, so far as they have a right to pronounce for the Catholic conscience, whether they do or do not conform to the law of God; for the Pope as the head of the Church is the interpreter and judge for Catholics of the divine law, natural or revealed. To explain myself. The people of this country [viz., the USA] had on their gaining their independence the right to adopt such a form or constitution of government, not repugnant to natural justice or the law of God, as seemed to them good; this constitution, when adopted, is obligatory upon me as a Catholic citizen, and not being repugnant to the divine law, is obligatory on the Pope in his relations with us as upon us. Then every law made in conformity to it is obligatory on my conscience, and consequently on the conscience of the Pope; for what binds the conscience of the simple believer binds alike the conscience of bishop and Pope. The Pope has recognized the American constitution as compatible with the law of God. ... [As such,] I assert no civil or temporal jurisdiction for the Supreme Pontiff, for I extend his authority only to the decision of the spiritual question involved in the temporal...". 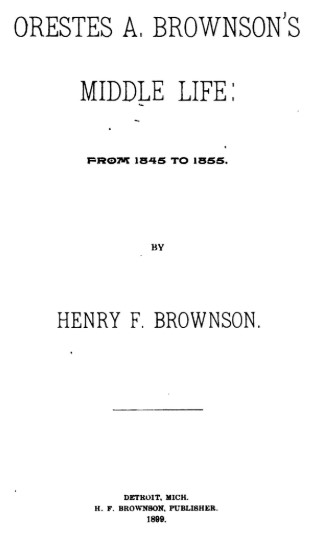