0 comment(s)
If you take a staple gun apart, expect it to stay that way forever and ever, amen.
Email ThisBlogThis!Share to TwitterShare to FacebookShare to Pinterest

"Am I being infringed upon?"

The major premise of the following reflections is that, in a democracy,  conservatism is always a rearguard action for progressivism. 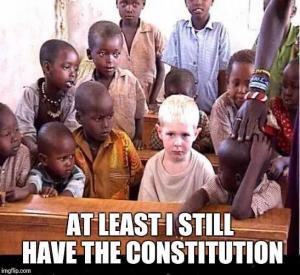 The outrage that a Republican president would betray our gun rights is the sound of a dying canary in a collapsing mine. Americans have lived with rigorous infringements on their rights to own guns for at least a century, and this is a trend --a feature, not a bug. Like it or not, there will be tighter, more European-style regulations in the nearish future, America will survive these minute adjustments (the goldfish-like memory of zealots notwithstanding), and Trump will in all likelihood win a second term even more handily than he won his miraculous first term. The outrage some are feeling about Judas Trump, gun-grabber-in-chief, is the feeling cucks of every stripe (and now "bump cucks") felt during the primaries and Trump's first year: the feeling of being rhetorically/dialectically/diegetically irrelevant for a change.

Is it the end of America? That depends; ask the groups I cited from the past sixty years. The wailing we heard for one messy news cycle among countless others was really just the sound of team red's marching  band continuing its rearguard action towards, we hope, reactionary fascism.
Email ThisBlogThis!Share to TwitterShare to FacebookShare to Pinterest