After weeks of thumbing moronically through a printed application, unsure how to fill it out and when it must be mailed, I completed the online application today at lunch in five minutes. (Yes, I printed the application from the same place I applied today. ::sigh -- head hanging in techy-shame::) All I must do now is wait for my materials to arrive in the mail, and then I'll be on my way to completing the graduate pre-req, "Catechism of the Catholic Church" (for credit), and can then enter the graduate curriculum proper (MA, not MRS).

As I mentioned, taking up this extra work "in the vineyard of the Lord" (cf. Isa 5:7) means leaving aside other tasks -- like blogging. Look for the following resolutions to show up here in the next few minutes to weeks:

1) No alcohol until Christmas.

3) No blogging (as a commenter or a poster) until I get Confirmed. (Bishop, on your mark.)

These things, except 1), which began last night, are subject to change until I make a semi-formal vow to God. But, they look pretty good to me at this time. Because I very much want to cut back on posting and dig into, the remaining series I have slated for FCA are increasingly weighing on me. It's not that I don't want to write them; quite the opposite: I want to write them so badly that they're taunting non-existence is eating at me. The pile of proposed words towers before me like a shrouded mountain; but I am determined to climb, crawl, scratch, scream, kick and fight my way to the top, with little to no loss of what I consider quality work. (Better not to sit than to post shit. Or, as Hemingway said, “The first draft of anything is shit.” I know because I have that quote taped upon my wall. Ah, the consolations of inspiration!)

I don't think I've ever disclosed it here, but a few years back I rode a bike from Pueblo, CO to (more or less) D.C. to way-southern-Georgia. (My last stop was a flooded house on the very street where Forrest, Forrest Gump, ran his leg braces off. Need I mention the trip was awesome?) Deep into Kentucky I decided to take a "shortcut"... which brought me not only through the turf of two massive German shepherds -- both of whose backs easily reached my hips as they ran beside me -- and up "Black Bear Mountain". (Need I mention I wanted to cry, literally, when I saw the sign, then after six or seven hours of riding that day?) Fortunately my two German friends motivated me onto the foot of BBM. Unfortunately, everything else about that damned bear weighed against me: the fatigue, the soreness, the humidity, the disorientation, the incline, the unpaved stretches of road, the invisible peak, etc. At one point, I was driving each pedal stroke down like a man walking, left... right... left... right. More than once I had to stop and rest, straddling my bike in outraged near-defeat. But I kept mounting, pedaling, advancing, climbing. The darkest moments came when I could almost feel the bear pushing me back with his granite claws. It was then, though, that I stepped in and literally screamed at the mountain. (I did the same in the Ozarks of Kentucky.) How I hated that mountain! And yet how I loved it! I hated it because it would not stoop down for my sake. And, yet, I loved it because it -- he -- had, in a strange way, waited all this time for me to challenge him, to scream at him, to lose myself in his gravelly hide. I crested the hill and rolled down his back into further adventures of Providence.

So it is with these blasted writing projects. I am determined to crest them, and to do with quality work. Countless times in the past few weeks I have surprised myself with my own emotions: gritted teeth as I open Word; cursing my notes as they sit there, clear and complete, but still unwritten; a sudden angry depression which makes me just want to lie down and forget about "all those words, words, words!" (At FCA the motto may as well be, “Accuracy by volume!”) Hemingway called the blank page a white bull. And, until recently, I had only a dim sense of how right he is. For a writer, the unwritten word is a constant thorn in the side; the unarticulated word is a constant ache in the spirit. The only way to kill that beast is to let it out its cage, the word-cluttered mind, and to let it stampede someone else at last. The only way to silence the empty bull’s brutal, jeering snorts is to give it voice outside your own mind. To escape the leering bull you must face him; to kill him you must give him life. Facing, corralling and killing the bull, however, is much easier said than done. Writing is hard work. I know now better than I ever did before.

My point? Please pray for me. Apart from my own fallen indiligence, confusion, error, apathy and exhaustion, at times I feel a genuine spiritual opposition against my work here, which shouldn't be a surprise since I aim always, even in levity, to demolish the works of the Enemy with the words of our Lord, the Truth. I've said it before and I’ll say it again: I write not only to kill the bull within, but also for you, and, above all, for God. Fides, cogitation, actio, ad majorem Dei gloriam. I feel His tender hooks in me (as well as perhaps His tenterhooks), pulling me to write; but I also feel the terrible hooks of the flesh and the Enemy pulling the other way, to brush it off, to keep it to myself, to put it off another day, to ease back, etc.

Dear St. Francis, my patron saint, and patron of writers, please pray for me! 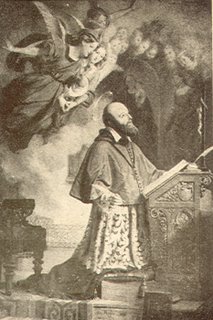